The Druid of Cambria

While all of the Llareggyb miners who settled in Cambria were (and still are) passionate about their Welsh ancestry, no-one was more passionate than Vic Harry. Vic had been down the mines since he was thirteen, even surviving an encounter with the Ghost of the White Lady, but that is another story.

As the miners settled into Central Otago, it was Vic who kept the Welsh language and customs alive. As the men established families, Vic ran classes for the wives and children, teaching them the language by telling wonderful stories of life in the valleys. His specialty was the mythical stories of Wales such as Gwion and the witch Ceridwen, Twm Sion Cati (The Welsh Robin Hood) and The Lady of the Lake at Llyn y Fan Fach. These stories have been handed down and now the Llareggyb miners’ grandchildren can recite them in detail.

Vic also organised the first Eisteddfod in New Zealand at Cromwell. This festival of music and poetry took a couple of years to be established with the Llareggyb Miners’ Choir as the only performers, and therefore, for two years running, won First Prize in the choral competition, but it soon became a major event for those throughout New Zealand and Australia who loved Welsh choral music. It is rumoured that the great New Zealand poet, Brian Turner, entered the poetry competition under an assumed name!! The Eisteddfod helped to spread the interest in choirs in general and was a catalyst for many choirs that still perform in cities, towns and villages. 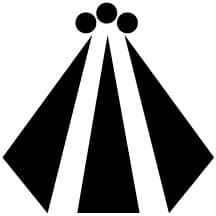 The Symbol of the Gorsedd of the Bards

In recognition of his devotion to Welsh culture and music, Vic was nominated to be recognised as a Druid of the Gorsedd Beirdd Ynys Prydain, or Gorsedd of the Bards. Mae Gorsedd Cymru yn rhan annatod o’n diwylliant. (The Gorsedd is an integral part of our culture.) Each member is given the title of “Druid.” This organisation was founded in 1792 by Iolo Morganwg to promote Welsh culture. Vic was too modest to complete the nomination so it was forwarded in secret. The Gorsedd has many notable members such Rebecca Evans, Ioan Gruffordd and Bryn Terfel and Gareth Edwards. Vic, the Druid, fits in very well with this company.

To this day Vic is reluctant to acknowledge his elevation to the position of the only real Druid in New Zealand, but for the Llareggyb miners and their descendants, Vic has been the foundation of their love of all things Welsh. Many will even tell you of the fantastic Welshcakes that he bakes!!